If there is one thing I know to be certain it’s that we all acknowledge 2020 has not been the one for most people. And while I’m sure this year will go down as one most certainly to forget for many, a particular highlight I will look back on is my discovery of the pure literary joy of Taylor Jenkins Reid. That said, I thought it rather fitting to post my thoughts on each of these delightful reads together, as I could no more separate my reviews as I could the interwoven threads that bind the themes of these two stories together. Covering different eras and vastly different characters, both books are mastery in the work of reflection and how looking back to a period of time can shift perception and provide clarity for those seeking it.

From the author of Daisy Jones & The Six—an entrancing novel “that speaks to the Marilyn Monroe and Elizabeth Taylor in us all” (Kirkus Reviews), in which a legendary film actress reflects on her relentless rise to the top and the risks she took, the loves she lost, and the long-held secrets the public could never imagine. Aging and reclusive Hollywood movie icon Evelyn Hugo is finally ready to tell the truth about her glamorous and scandalous life. But when she chooses unknown magazine reporter Monique Grant for the job, no one is more astounded than Monique herself. Why her? Why now? Monique is not exactly on top of the world. Her husband has left her, and her professional life is going nowhere. Regardless of why Evelyn has selected her to write her biography, Monique is determined to use this opportunity to jumpstart her career. Summoned to Evelyn’s luxurious apartment, Monique listens in fascination as the actress tells her story. From making her way to Los Angeles in the 1950s to her decision to leave show business in the ‘80s, and, of course, the seven husbands along the way, Evelyn unspools a tale of ruthless ambition, unexpected friendship, and a great forbidden love. Monique begins to feel a very real connection to the legendary star, but as Evelyn’s story near its conclusion, it becomes clear that her life intersects with Monique’s own in tragic and irreversible ways. Goodreads

The Seven Husbands of Evelyn Hugo first introduces us to drifting journalist Monique, who’s in a questioning stage in her life. With her personal life in a shambles after the collapse of her marriage and her career seemingly at a stalemate, Monique is confused when famous golden age actress, Evelyn Hugo personally requests her as the writer to cover her much-anticipated magazine feature piece. While apprehensive at first, Monique sees this as a stepping stone to earning the trust of her editor and perhaps the possibility of finally pitching and writing her concepts in the future, and she accepts the strange offer with trepidation. What follows next is the overwhelming offer of writing Evenly Hugo’s first and only memoir, going in-depth into her well covered and much speculated seven marriages, spanning the length of her Hollywood glam career as an Oscar-winning actress. Nothing is off-limits in the recanting of her story and Monique in the process begins to find her sense of self while reliving Evelyn’s turbulent past.

This story took no time at all to delve into and I was fully immersed in the glittering, complicated and sometimes tragic life of Evelyn Hugo. The use of mixed media coverage, coupled with Monique’s slow-burning obsession with uncovering all of the actress’s secrets made for a surreal reading experience. It was almost as though Evelyn really did exist in some other realm, and that her seven marriages were indeed as infamous as they sounded – reading the stories behind them felt as though one was taking a peek behind the velvet curtain of celebrity and getting to grips of her true life in the spotlight. The bigger picture of this story is truly something to marvel at; its highs are high, its lows are low and everything comes together in the end so perfectly, it leaves you wishing you could go back and relive it all over again for the first time.

Both of these strong female characters hold their own throughout the story and I appreciated that one didn’t overshadow the other in any aspects. It’s almost refreshing in a way, to discover a story with two female leads who aren’t competing with one another, but rather their mutual respect for the position of the other enhances the storytelling on every level. The jumps between past and present are carefully presented to the reader and added feature of media excerpts of the great Evelyn Hugo’s tabloid exploits give a sense of realism to the overall ‘story within a story’ narrative. I particularly enjoyed each character’s emotional journey from beginning to end, and how evident it became that one’s life experiences and the retelling of time gone past can provide opportunities for acceptance, understanding and healing no matter your background. 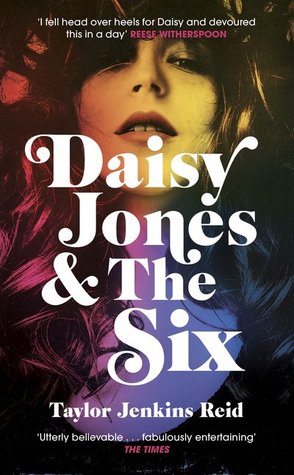 In 1979, Daisy Jones and The Six split up. Together, they had redefined the 70’s music scene, creating an iconic sound that rocked the world. Apart, they baffled a world that had hung on their every verse. This book is an attempt to piece together a clear portrait of the band’s rise to fame and their abrupt and infamous split. The following oral history is a compilation of interviews, emails, transcripts, and lyrics, all pertaining to the personal and professional lives of the members of the band The Six and singer Daisy Jones. While I have aimed for a comprehensive and exhaustive approach, I must acknowledge that full and complete accounts from all parties involved has proved impossible. Some people were easier to track down than others, some were more willing to talk than others, and some, unfortunately, have passed on. All of which is to say that while this is the first and only authorised account from all represented perspectives, it should be noted that, in matters both big and small, reasonable people disagree. The truth often lies, unclaimed, in the middle. Goodreads

Daisy Jones & the Six explores the rise and demise of a fictional 70’s rock band, made famous for the notorious reputations of lead singers Daisy Jones and Billy Dunne. Before we go any further though it must be noted – the narrative style of this book is not for everyone. Written in interview form, the story follows the retelling of events as witnessed by those who were there. The writing style is conversational and the book is divided up into eras rather than clearly defined chapters. This seems to be a dividing point for most people who read Daisy Jones & the Six – some people love it, others loath it. I was an absolute fan from the moment I read the first page.

Once you settle into the unique layout of the book, the pages just fly past and that’s what I adored about my reading experience. The almost documentary style of writing meant I felt like I was watching this story unfold rather than turning the pages and that made it a joy for me to devour. In a similar sense to Evelyn Hugo, Reid has the innate ability to create fictional stories that come alive through vivid imagination and real, raw characterisation. In all intense and purposes, Daisy Jones & the Six may as well have a been a real band. That’s how powerful her world-building is in both of these stories.

Daisy Jones starts with our main character Daisy, who explains her less than regular upbringing in the glittering hills of Los Angles, and how she quickly found herself rubbing shoulders with the rich and famous thanks to the freedom that accompanies teenagers with absentee parents. In contrast, brother Billy and Harry Dunne are pursuing their dreams of playing in a renowned rock band, touring the Americas and living large. Through a series of events, Billy and Daisy are soon thrust together by their uncanny ability to produce hot rock ballads, and the rest is history – fictionally speaking of course.

Covering topics synonymous with rock bands throughout the decades – sex, drugs and rock n’ roll – Daisy Jones & the Six explores each band members personal struggles with rising fame, the oblivion of youth and the pursuit of happiness, and the realisation that all were blind to each other’s journeys. The stories can be described only as a whirlwind rollercoaster through the 70’s music scene, and a big reveal at the end leads to a bittersweet closing of an epic time to be alive. I loved how each character’s unique take on scenes resulted in the perfect all-around storytelling experience, and you’re never left thinking there was any other way for it all to turn out instead.

Two very different books, two very different stories but one common thread binding them together – the power of reflection. It almost leaves you wondering, what will we all reflect on decades down the line when we remember this time in our lives.