To say the latest edition to The Twilight Saga was long awaited would be the most gross of understatements 2020 has seen to date. Rather, this new instalment in the enduring love story of human girl Bella, her vampire boyfriend and werewolf best friend was begged for, pined after, petitioned and reimagined a hundred times over in the 12 years since the leaking of the partial manuscript . Needless to say, I was as anxious as any other Twi-hard fan girl to get my hands on the most coveted retelling of Twilight, told through Edward’s perspective. However, in the years since the explosion that was this Saga across the world, my views, opinions and life experiences have led me to see this series in a vastly different light to that of the adoring and naive 17 year old who was enamoured by Stephenie Meyer’s entrancing world. So Edward Cullen…I have some thoughts and they need to be shared. 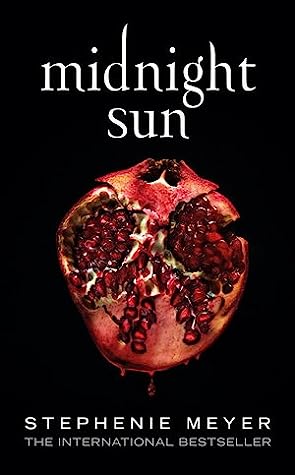 When Edward Cullen and Bella Swan met in Twilight, an iconic love story was born. But until now, fans have heard only Bella’s side of the story. At last, readers can experience Edward’s version in the long-awaited companion novel, Midnight Sun. This unforgettable tale as told through Edward’s eyes takes on a new and decidedly dark twist. Meeting beautiful, mysterious Bella is both the most intriguing and unnerving event he has experienced in his long life as a vampire. As we learn more fascinating details about Edward’s past and the complexity of his inner thoughts, we understand why this is the defining struggle of his life. How can he let himself fall in love with Bella when he knows that he is endangering her life? In Midnight Sun, Stephenie Meyer transports us back to a world that has captivated millions of readers and, drawing on the classic myth of Hades and Persephone, brings us an epic novel about the profound pleasures and devastating consequences of immortal love. Goodreads

Midnight Sun sees us returning to the ever gloomy, rain soaked forests of Forks, Washington, only this time we finally know what thoughts have plagued Edward Cullen from the moment he clapped eyes on young Bella Swan. We learn how dull of an existence Edward was living previously and, to be honest, it’s no wonder he craved the danger that hanging out with a human girl could get him into. Between day dreaming during his 100th term of high school, to hanging out with his coupled up siblings, poor Edward was really just drifting through his vampiric life and not getting up to much of anything. So when Bella enters the scene, Edward’s internal struggle between what he knows is right and what he wants is fully revealed, and his erratic behaviour makes so much more sense now.

That said, this is one heck of a tome within the Twilight Saga books, considering that the final book, Breaking Dawn, is a mere 94 pages longer than Midnight Sun (and that covered so much ground it had to be split into two movies…). Taking into account its sheer size, which was surprising to me, you’d expect a bunch of new information, scenes, backstory etcetera; but unfortunately not. Those 600-odd pages are largely made up of Edward’s seemingly never-ending monologue of what a bad guy he is for pursing what he wants…*insert eye-rolling sigh here*. Our famous vampire’s head is a dark, depressing and masochistic place to be and it’s no wonder Stephenie put off having to delve into it.

Now, this wasn’t an entirely wasted trip down memory lane – there were some high points in-between all the self loathing and moping around that was going on. I loved being immersed in Edward’s mind reading powers at long last, and hearing the thoughts of other characters provided the intrigue and entertainment the original story from Bella’s perspective lacked. It added so much character development, stretching from Bella’s schoolmates through to bigger characters such as Charlie, Renee and the rest of the Cullen clan. Smaller loopholes from Twilight were either expanded on or explained further, which was a great find for fans of the original book as well. But I was disappointed by how few new scenes there were; I went into reading Midnight Sun expecting much more than what we were given and I think that’s where the ball was dropped, in my opinion. I enjoyed the new snippets of story way more than the rehashing of old dialogue and character interactions.

The flashbacks of Edward’s past were way too sporadic and didn’t even begin to cover the ground I had been hoping for within a story from his perspective. Sure, the restrictions of maintaining the original dialogue and scenes were probably the main stumbling block for this book at the end of the day, but eventually I was over Edward’s mental mumblings and grumblings that spanned pages, and I started to lack interest. If the last half of this book is anything to go by, I think Meyer had the same sentiments…oh boy did the James chase scenes drag on and on and on. This has to be my biggest peeve with Midnight Sun. It was unnecessary, boring and to be honest, I ended up skimming through what was supposed to be the pivotal point of the story.

After turning the last page my main takeaways would have to be: Edward is a way more complex character than I ever could’ve imagined and that ending (if you know, then you know, no spoilers here) actually had me disappointed in him. I was most surprised by Bella’s character development in Midnight Sun and actually liked her more in this version than her own. Other honourable mentions include Emmett and Edward’s close brotherly bond, Alice’s visions finally making some sense, and Rosalie and Jasper being the most practical members of the Cullen clan.

Midnight Sun: a great dose of teenage nostalgia in a time when we really needed to be reminded of better days gone past. I appreciated returning to my fangirl days but was mostly disappointed that I didn’t enjoy it more. I guess the lesson here would have to be, don’t wait for your fans to grow up before you give them what they asked for 12 years ago.